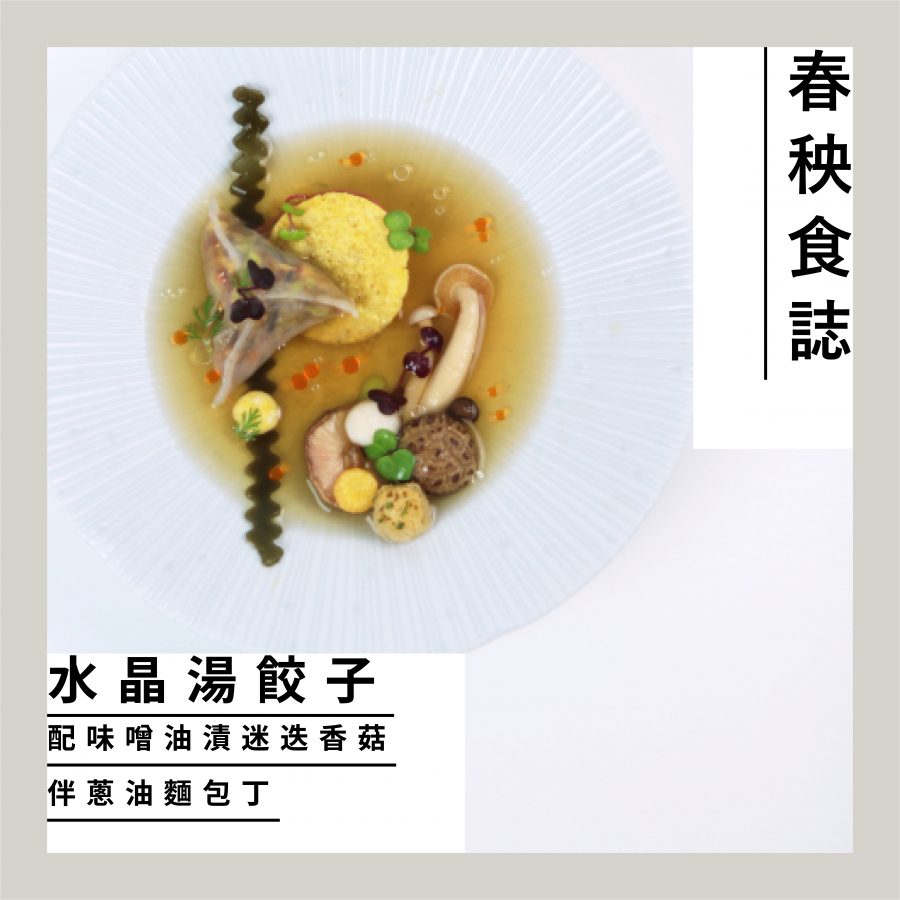 In front of Mak Kee there is always a long line of customers waiting patiently for the hot and fresh pan-fried buns, crispy fried-dumplings, and scallion pancakes with extra green onions. Indeed, the buns and cakes served in this Shanghainese street food shop have long been recognised by the MICHELIN Guide despite their moderate price tags. Moreover, to maintain freshness, the shop owner only sells his signature scallion pancakes for a limited time each day. Sadly i failed to savour the shop’s signature item due to my late arrival on the day i visited the shop, I ordered a bowl of hot and sour soup dumplings instead for a refreshing taste. The shop owner, Jack, originally had a stable and comfortable job in a bank after graduating from university. But one day, his father decided it was time to retire and give up the shop. Jack felt it would be a great pity to close the shop, so he made the decision to resign from his banking position and inherited his father’s food shop. “My father raised my sister and I by operating this shop. So, I can’t afford to abolish this family heritage.” Jack recalled. Listening to Jack’s family story, I felt the history of his family legacy imbuing the Mak Kee experience just as each delicious mouthful from the bowl of steaming hot and sour soup did.

The Protean Hot and Sour Soup

Hot and sour soup is one of the classic Chinese soups.  Shredding the ingredients is required as part of the preparation method, this opens the doors to a wide range of deviations to the recipe and therefore leads to many different flavour profiles. For instance, the Taiwan variant tastes sweeter, the Sichuan variant is more peppery, and the Shanghainese love to cook it with doubanjiang (broad bean chilli sauce), not to mention the various recipes with diverse characteristics inherited by overseas Chinese. Amongst the varied recipes, the Chinese restaurants in premium hotels usually adopt extravagant ingredients like sea cucumber, Jinhua ham, and seafood to enrich the flavour of the soup. In comparison, most people tend to choose the quotidian ingredients like mushrooms, winter bamboo shoots, frozen meat, fungus, carrots, eggs, and shredded tofu. Nevertheless, the flavour of each bowl of hot and sour soup is unique as every individual that seasons it according to personal background, experience, and preferences. This makes the sweetness, sourness, saltiness, spiciness, and umaminess of the soup an analogy to each unique taste of life flavoured by friendship, family connection, romantic experience, and memory of good and bad consequences.

A Fusion of Tradition and Modernity

When Jack first took over the shop, he worked around the clock to learn cooking techniques from his father and to refine his skill in dough making. For him, it was an exhausting period full of frustrations. Fortunately, his family members have always had his back in supporting the operation of the shop. It is their mutual dedication that passes on the delicacies and spirit of Mak Kee. When they saw the queue of kaifong lining outside the shop getting longer every day, they gradually realised that their devotement was not in vain. Eventually, Mak Kee earned the recognition from the MICHELIN Guide; more and more customers were attracted to the shop by its reputation. Although this seal of approval reaffirmed the efforts of Jack and his family, it also put them under pressure. Not only have they become more discreet in the quality of their food, but they have also worked extra hard to create new dishes to live up to their kaifong and customers’ expectation. Jack once introduced the creamy and richly flavoured “cheese scallion pancake”. However, as he was unwilling to break the shop’s tradition of offering kaifong with affordable yet palatable foods, he couldn’t balance the cost without raising its price. As a result, he had no choice but to give up the idea and move to introduce other items such as crab roe xiaolongbao (soup dumpling) that corresponded to the shop’s mission.

Many long-established eateries run by traditional Chinese made their name by serving customers in their neighbourhood. The same goes for my grandfather’s first cha chaan teng that was expanded to a dim sum and siu mei restaurant after my father took over. Despite the significant expansion, my father remained cautious regarding cost control as he deemed the old customers as the priority. Later, when it came to my turn in succeeding the family’s heritage after I returned from aboard, I compiled a family cookbook from my father and grandfather’s discoloured handwritten recipes and passed on my family delicacies. Attributed to the similar experience of taking over a family business, I genuinely appreciate Jack’s insistence on his training in fundamental cooking skills. Not only is it crucial in maintaining traditional flavours, but it also paves the path for bringing new elements into traditional recipes, allowing Mak Kee to sustain a stable and intimate connection with the kaifong in Fort Street, North Point.

The Refreshing Hot and Sour Soup

When I was compiling the handwritten recipes from my father and grandfather into a family cookbook, I didn’t only seek to come up with new dishes for my private kitchen. Instead, I aspired to sublimate traditional Chinese cuisine by integrating it with the excellent “look”, “aroma”, and “taste” that I have learnt from French pastry, international culinary, and French cuisine respectively. Inspired by the foods served in Mak Kee and my practical knowledge in integrating the essence of “look, aroma, and taste”, I deconstructed the hot and sour soup and repackaged its ingredients in a completely different form. By substituting the traditional content such as Jinhua ham, mushrooms, Zhenjiang vinegar with ingredients of similar taste like Parma Ham, dried Shiitake mushrooms, and Balsamic vinegar, then complementing those elements with kombu broth and miso for an umami flavour, spring onion croutons adapted from Mak Kee’s scallion pancakes for a fresh aroma, and eggs for garnishment, I created the Crystal Dumpling with Miso Dashi and Rosemary Mushrooms with Spring Onion Croutons. Through modernising the traditional recipe with cross-regional ingredients and innovative cooking method, I wish that  my hot and sour soup in crystal dumplings will reinvigorate the taste buds of the kaifong in North Point. 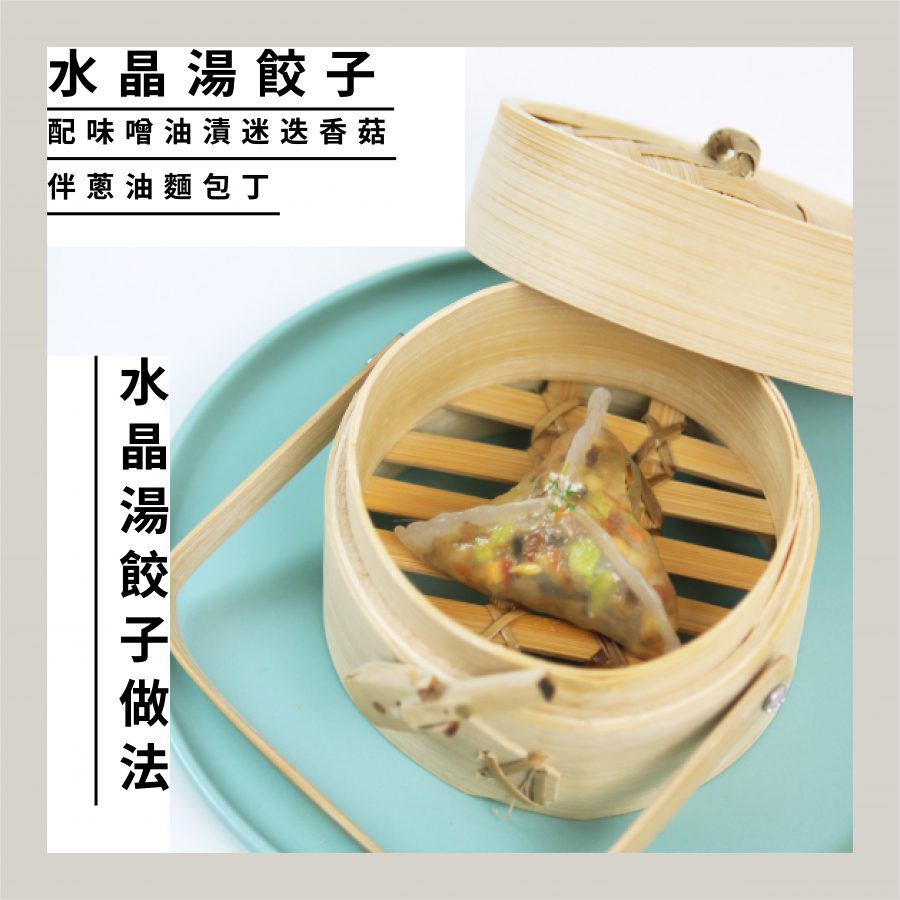